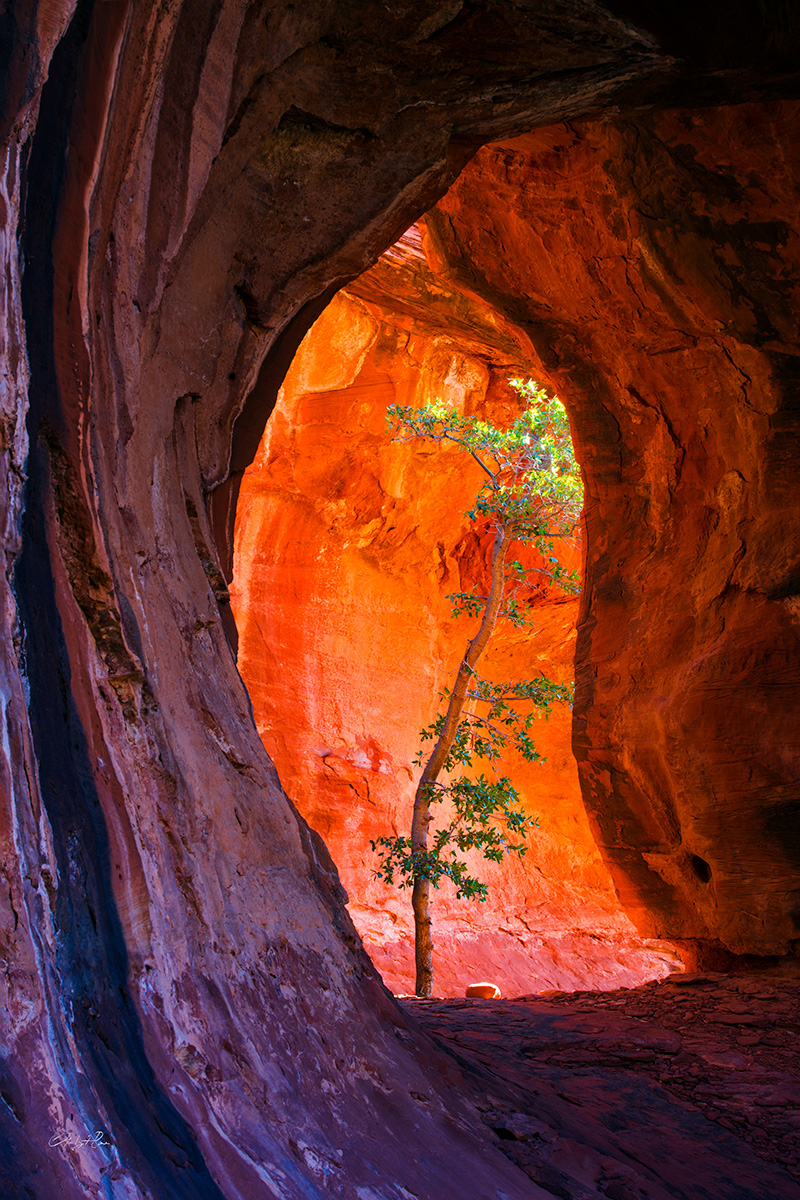 With weeks of free time away from my temporarily closed gallery, but no real opportunity to travel, I decided to spend some of my time hunting for the perfect photo of Sedona. Sedona has been my main focus for landscape photography over the past  year, so I wanted to capture something fairly unique that really would speak to me about what makes Sedona a magical place. Over a year ago, I had been scouring the images of Sedona online, looking for something that would really captivate me. I found a photo of this tree in a cave, that a local photographer took eight years ago. It immediately grabbed me, and I knew I had to find this location. I tracked down the photographer (who had since moved away) and explained to him how his photo had inspired me. I told him I was not asking for directions (since it is poor etiquette to hound another photographer for location info) but that I would figure it out eventually!  He responded and thanked me, and reiterated that he did not give out locations information so as to not encourage off-trail hiking.

So, I spent a few hours studying all of his photos from this time and general place, and determined from Google Earth and my own personal hikes approximately where he had  taken the photo. I set out a couple months ago and bushwhacked through thorn bushes, scrambled up cliffs, looking for this cave. I didn’t find it…but I knew I was close…real close!

After I returned from my hike, I sent this photographer a couple photos I took on my hike to prove I had been close to this cave. I politely asked him if he might offer me a clue where to find it, so that I would not unnecessarily fall off a cliff trying to find it.  He obviously appreciated my effort, since he quickly responded with detailed directions to the cave!

Even with his tips, it still took a lot of route finding and pulling cactus thorns out of my arms and legs before I finally found the cave. When I first saw it, chills ran through my spine–it was just as I had imagined from the photo I had seen! But it was getting late in the day and there was no sunlight, so I vowed to return for better light. I just wasn’t sure when that would be.

Third trip, I figured mid-day might be best, so I left late morning and arrived at the cave before noon. There was some good light but it left quickly. I spent a couple hours studying the terrain and placing rocks on the ground and cliff walls, to see how the sunlight was moving around in the cave. I then determined that early morning would be best, since that is when I expected sunlight to bounce off the front wall of the cave and cause it to fill with glowing light.

In the interim between trips, another photographer friend of mine pointed out to me that another  landscape photographer had photographed this tree in 2014, so it obviously was in his words a “semi-known” location.   But it clearly was not a well traveled spot!  This other English photographer mentioned in his description of his shot that he had spent 4 trips to the cave, and determined that the best light would be at 11 am. But that was late summer, and I still felt early morning was best for mid April….

Fourth time’s a charm! I returned before sunrise and hiked in the dark through the thorn bushes and cactus and up to the cave.  The cave was glowing orange at sunrise, but there was still no direct light on the tree. I waited another hour before light slowly advanced at the top of the tree. And that was when it was at its most sublime. I took several sets of images to ensure I had everything in proper focus and with the best light. The resulting final image of this Emory oak is 240 MP, and I intend to offer it as a limited edition at its full size of either 40X60 or 48X72 inches vertical. It will be an amazing reminder of an amazing place, a sacred, special place, at a special time.  The quintessential image of Sedona!