When I learned about the upcoming “Great Conjunction” of Jupiter and Saturn several months ago, I immediately began scheming and planning a shot of this once-in-a-lifetime event. The last really visible conjunction like this was in the year 1226! Coincidentally, another similar conjunction will be in the year 2080, but it seems unlikely that I will be around to see it! While the two planets will be closest on the night of December 21st, from a photographic or aesthetic standpoint I figured the night of the 16th would be best, when the crescent moon joined the planets in the sky.

First, I checked an astronomy app (Stellarium) to see where this trio of astronomic objects would appear. I determined that my foreground had to be lined up with an azimuth of 225 degrees to get my shot. So I spent a few hours ‘flying’ around in Google Earth to figure out the most iconic location to photograph the event. I quickly settled on a spot north of Monument Valley in Arizona. This location is close to “Forrest Gump Hill”–a spot made famous by the movie in which Tom Hanks stops running along a highway in this amazing desert location. I also thought of a couple back up plans in case the weather did not cooperate; but I really had my heart set on Monument Valley.

I envisioned a long view of the iconic valley with the highway leading into it, as in the Forrest Gump scene, but zoomed in so that the monument formations were present, but smaller relative to the size of the crescent moon. It’s one of my favorite ‘tricks’ of landscape photography–foreshortening. I first fell in love with foreshortened images when as a child I would wow at National Geographic photos of people, animals, or objects looking tiny in front of a setting sun or moon. I needed to be at this location at just the right time after sunset, when the moon was relatively low to the horizon and there would still be some color from the sunset.

To achieve my vision, I knew I had to use the best lens I possibly could get. The Sony 400 mm f/2.8 seemed like a good choice, and since I didn’t;t have a spare $12,000 to purchase one, I rented a lens from borrowlenses.com. It was still a bit pricey, but I figured it was worth spending a bit for this special occasion.

The morning of the conjunction, I drove the three hours to Forrest Gump Hill and then scouted for the best location for my shot, which turned out to be off a dirt road just north of Gump’s view. I watched the sunset unfold, then waited for everything to line up nicely with the cars driving up the highway that runs through Monument Valley.

I took several sets of three horizontal photos with the 400mm telephoto, with different exposures so that I could. get car lights to trail in the foreground, but properly expose the moon and planets. So, the exposures ranged from 1/15 of a second for the moon, to 20 seconds for the valley and cars. Later, I stitched the 3 horizontal images together in Photoshop to form a high resolution vertical panorama. It was a bit of editing work, but necessary to get all the detail in the shot that I wanted. The resulting image is so big that at full size you can make out Saturn’s rings, tow of Jupiter’s moons (Ganymede and Callisto) and the craters in the crescent moon (see below). This should make a stunning print!

I could see why some say a similar great conjunction that took place about 6 BC is speculated to be the origin of the “Star of Bethlehem” legend. The stark but beautiful desert landscape, the flowing traffic into the iconic valley, and the perfectly aligned celestial objects above all called to me like some great harbinger of change; great change–a new beginning following a rough 2020 to lead into the hope of a better year ahead.

The Secret Oasis of Arizona 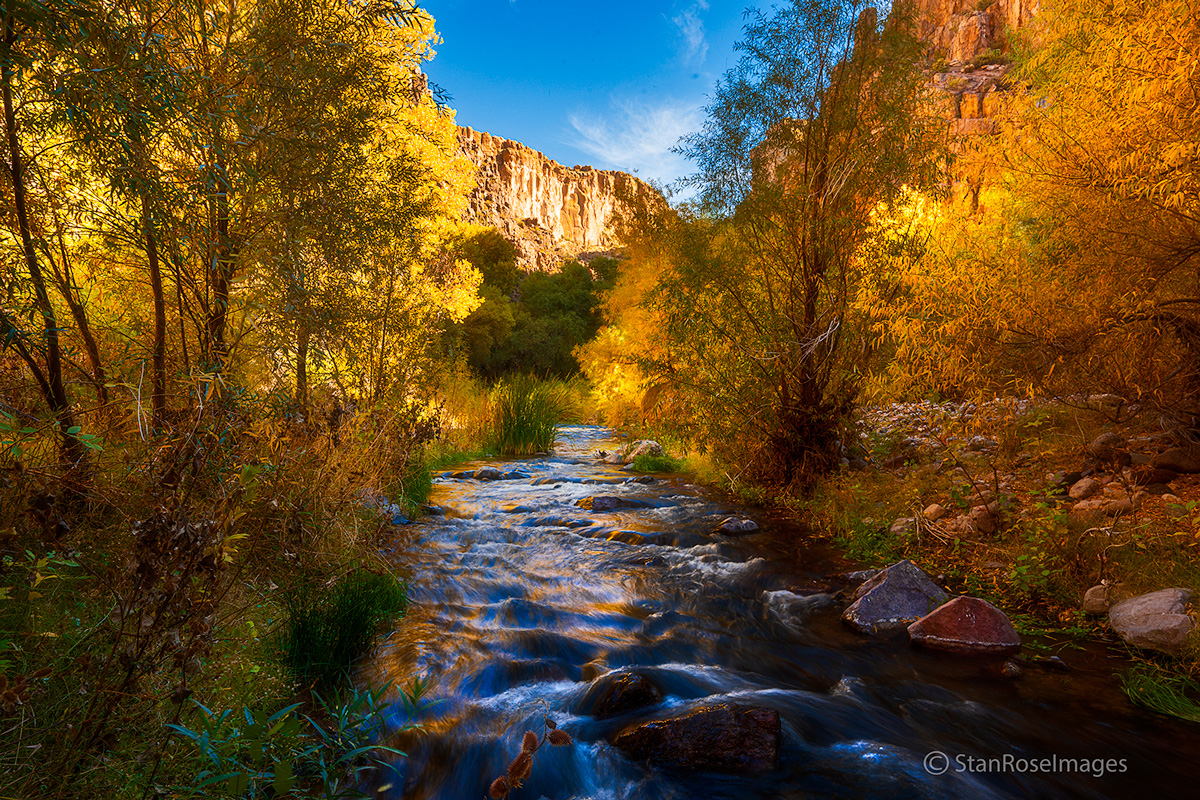 Aravaipa Canyon is one of the most beautiful canyons of the Southwest, and fortunately, access to the canyon is strictly regulated.  Only 30 people a day are permitted to enter the canyon from the west side (20 from the more remote east side), via a bumpy dirt road about an hour southeast of Phoenix.  Given its southern latitude and low elevation, fall colors hang on in this riparian valley well into December.  Sycamore, ash, cottonwood and willow trees line the swiftly flowing creek, and they are ablaze with color in early December.

I secured my permit weeks in advance, and hoped for plenty of sunshine for my hike. The weather cooperated, with high temperatures in the lower 70s.  The hike began along the creek and continued for about a mile before entering the canyon. Then, the walls of the canyon quickly narrow, and from that point on most of the hike is straight through the creek. The water was never more than knee deep, but it was swiftly moving and keeping my balance was a constant challenge!  1000 foot vertical walls line the creek along the way, and the scenery is jaw-dropping. Besides the amazing landscape, the hike features a diverse collection of flora and fauna, and ancient cliff dwellings that date back 100s of years. 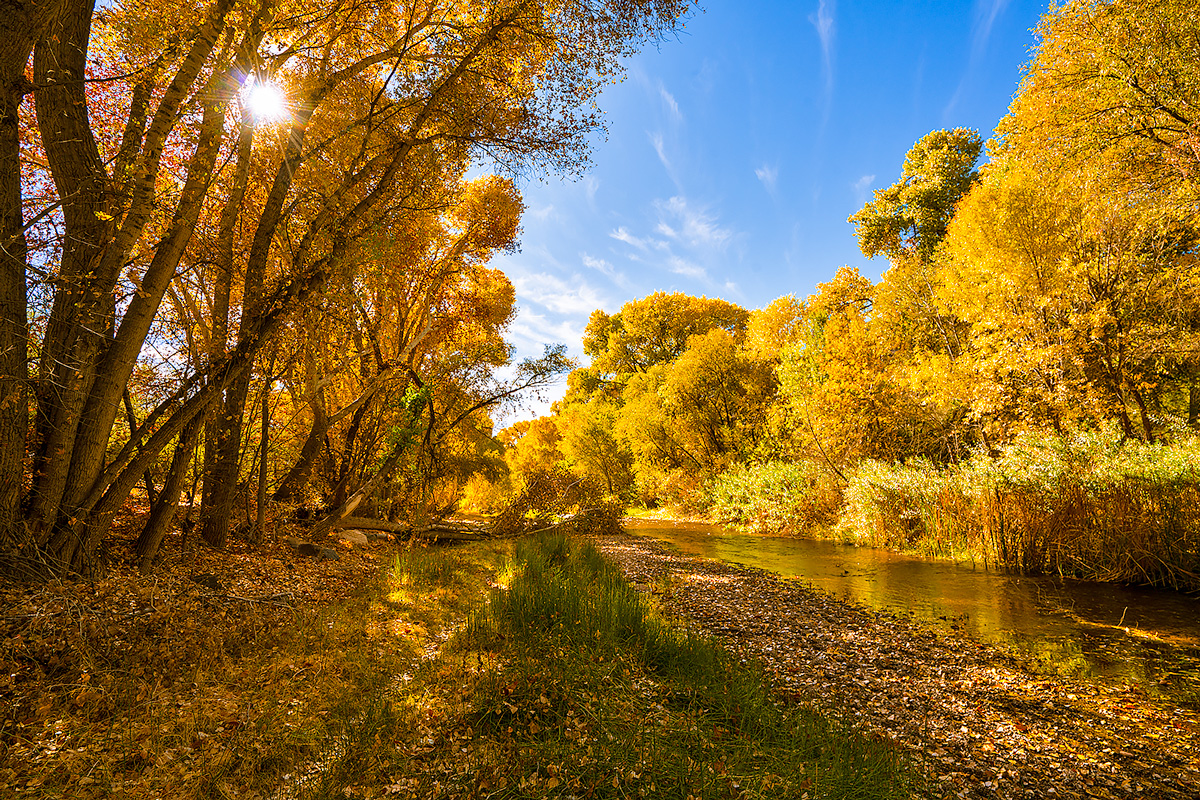 I hiked about halfway through the canyon, or about 5 miles, before turning around to head back to the western trailhead. I was glad that a couple trail posts indicated where the exit from the canyon was located. I only saw a few backpackers on the trip in, and I had the creek all to myself for the second half of the trip.

Such a beautiful and serene place! It is truly one of the great gems of the Desert Southwest. I hope to return soon and explore the canyon from its east side. 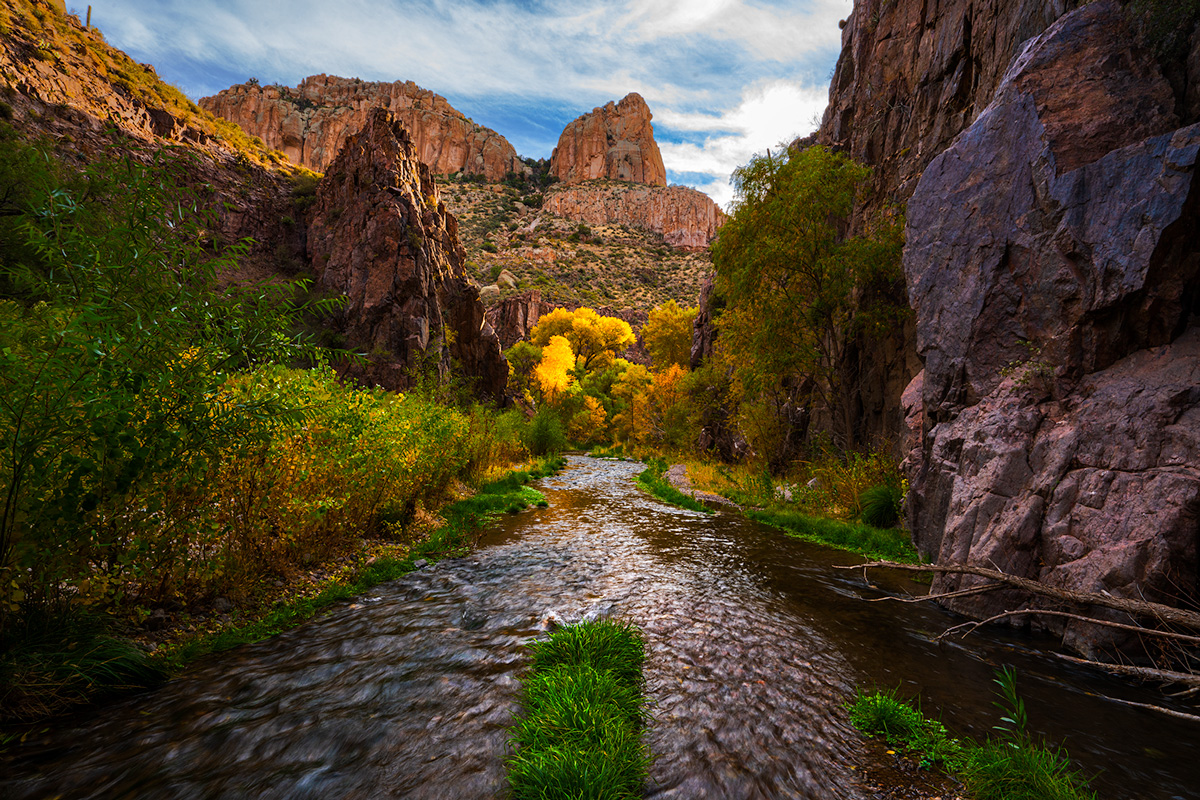