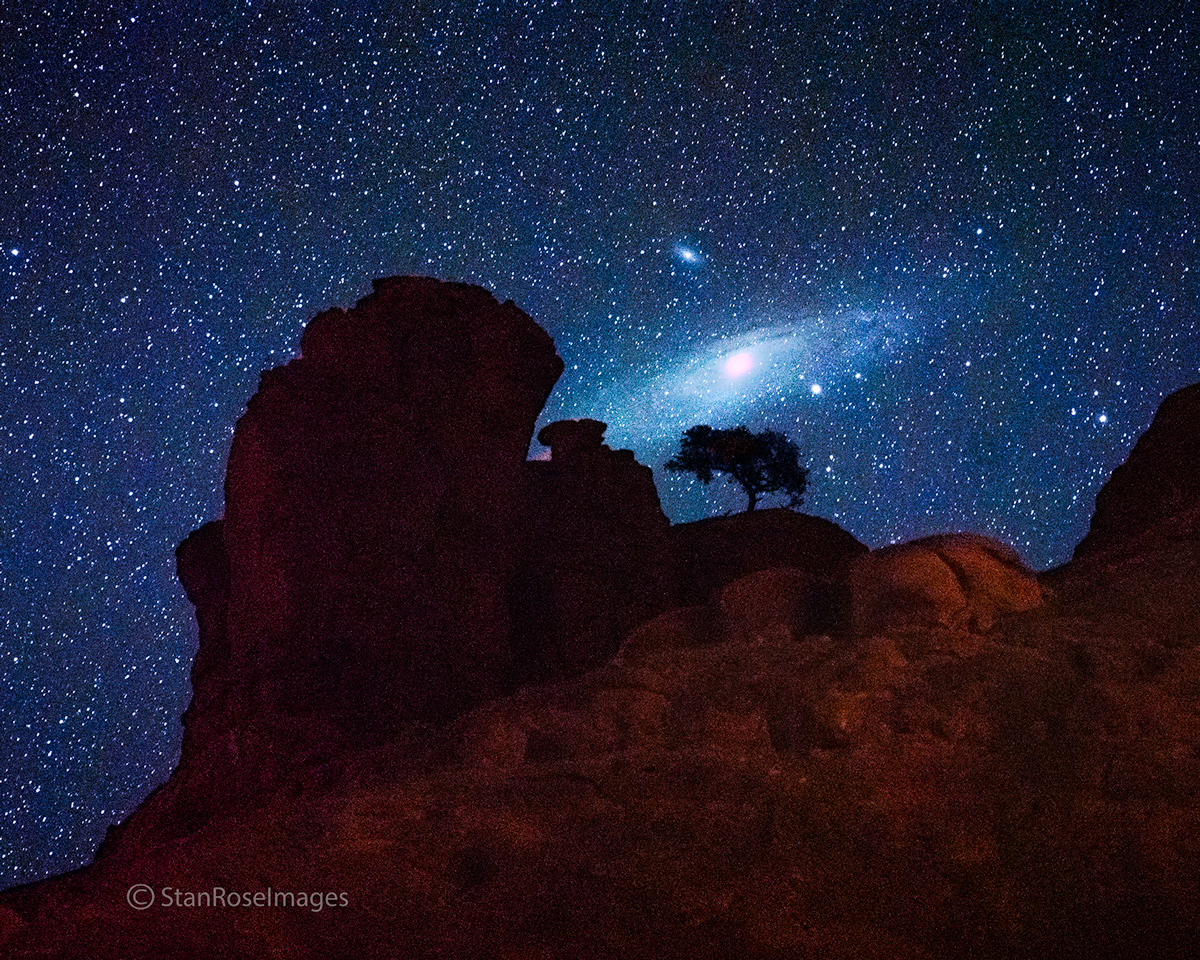 A few months ago, while I was photographing the full moon rising over Bell Rock in Sedona, I noticed a lone tree growing on its summit. I love to photograph solitary living objects, like trees and flowers, because they resonate with me as being survivors. They thrive despite the heavy odds and the challenges of their isolation, alone in facing the elements. So when I spotted the tree, I immediately envisioned an image with some astronomical object behind it, to show the survivor in the context of our vast unforgiving universe. My first thought was capturing the full moon behind the tree, but the moon at that time was not in a good location in the sky for the right composition, so I figured I’d tackle this idea later in the year.

After that experience at Bell Rock, I had been experimenting with various night time compositions in northern Arizona. This is such a fantastic place to explore night photography, thanks to the relative lack of light pollution.  Recently, my wife Susie prompted me to attempt to photograph the Andromeda galaxy, which was getting higher in the sky after sunset. I’ve always been intrigued by Andromeda, because it is the most distant night sky object you can see with your eyes—the light from the galaxy is literally 2.5 million years old!  It is also the closest galaxy to our own Milky Way, and thus it gives us a glimpse at what our own galaxy might look like from distant space.

After a few test shots with a wide angle lens, to help me quickly locate Andromeda in the sky, I managed to successfully photograph the galaxy with a telephoto lens.  I was surprised at how much detail my Sony mirrorless camera could capture, without a telescope! That is what gave me the idea to use Andromeda, and not the moon, as a background object in my tree composition at Bell Rock. Andromeda was much more intriguing and original to me than the moon.

I studied the sky charts on an app for a bit, and then waited for a clear night to head to Bell Rock. On my first attempt, the trail I took did not give me a good angle on the tree and ridge top, so I returned a couple days later to try a trail that brought me closer to the base of Bell Rock. I used a 200mm telephoto lens and once it got dark enough, I took a few test shots to get a good feel of where Andromeda was in relation to the tree. I waited an hour or so before moving a bit farther up the trail so that I could get the optimal angle on the tree and galaxy. I had to anticipate when Andromeda would emerge from behind the rock, since at his point it was blocked by the top of the rock face. When I saw the glow from the galaxy begins to mingle with the silhouette of the tree, I prepared my camera settings and then took a quick series of photos as Andromeda rose above Bell Rock. I only had one opportunity, because within minutes Andromeda was high above the tree and the composition was no longer as interesting.

I was pleased at the performance of my camera in capturing the detail of Andromeda with its spiral arms and twin satellite galaxies above and below the spiral. The final photograph represents to me the beauty and resilience of life surviving in an endless see of stars, the fractal design of nature boldly proclaiming its eternity.